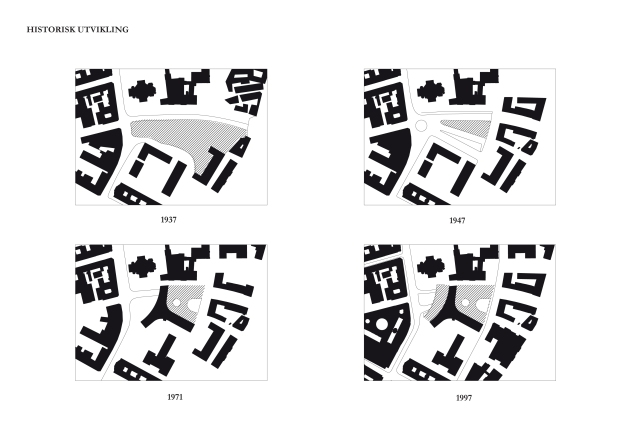 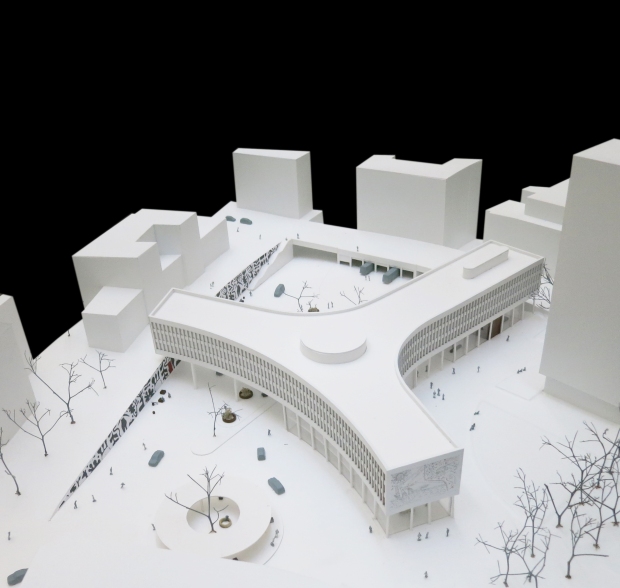 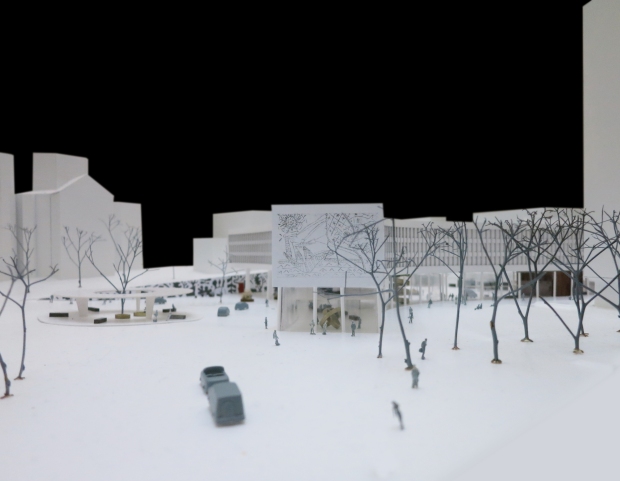 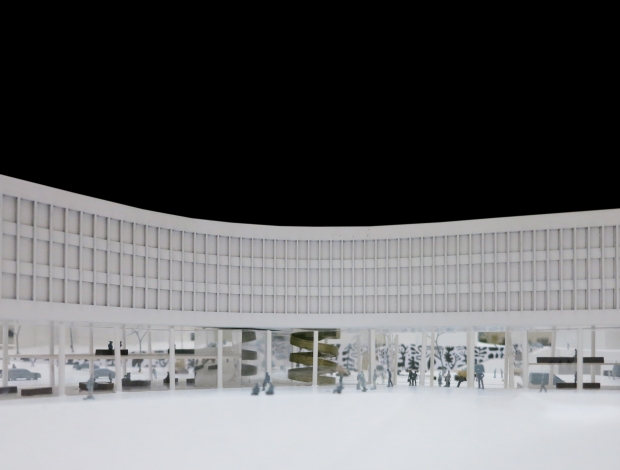 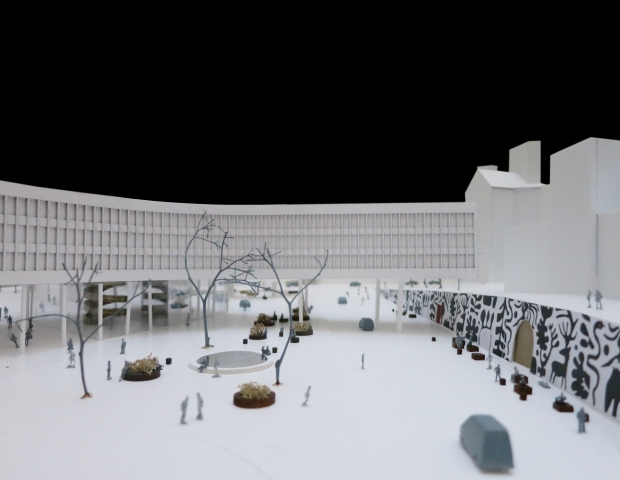 This project is a vision of what the Arne Garborg Square in Oslo could look like in an immediate future – if we choose openness and public life over security issues. The project is rooted in the original design of the square, but links past, present and future by implementing several historical and future events and developments.

History
From 1940 and into the sixties, Arne Garborg’s Square was an open square in front of the main fire station and a much frequented space between the government quarter and the Deichmanske Library. In the middle of the square was a green area with benches and a fountain. The paving was elaborate and there were stairs leading from the square and up to the library as well as the street of Grubbegata. Its main function, however, was being one of few open spaces in the area – ‘an oasis in a desert of concrete,’ as the fire department would later describe it. When the Y-block was built in the late sixties, a lid – a new level connecting the streets of Grubbegata and Akersgata – covered the Arne Garborg Square. In addition to closing the open square, this reduced the sculptural and architectonic qualities of the Y-block – the horizontal structure that so precisely was meant to be contrasting the vertical building of the H-block.

The lid and Ring 1
Arne Garborgs plass 1940-2020 looks at the consequences of removing the lid without altering the Y-block. This will reap double benefits: Arne Garborg Square is restored, and the Y-block is preserved with enhanced architectural qualities. Uncovering the ground level, with cross-connections and public functions, will contribute to re-activate this urban space.
The main obstacle to this vision is the Ring 1 road. Connecting the short road stretch between the Ibsen and Vaterland tunnels will minimize traffic through the square (keeping only Hospitalgata and the entry/exit to Ring 1). This will make it possible to create a city square for pedestrians including broad sidewalks, tables and benches.

Architectural qualities
Many of the qualities of the former square are restored in the project, such as the vegetation, fountain and the Garborg bust. The original paving made the square appear broader/shorter in direction of the fire station and narrower/longer towards Akersgata. A new version of this false perspective is planned. The front wall of the Deichman Library will have toilets, a new entrance, cafes and new stairways. In addition, the bottom storey of the Y-block facing Hospitalsgata will be given an open design with public functions.
The Y-block has been tidied up – the lid around it is removed, and the protruding bottom storey towards the Nygaardsvolds Square/Høyblokka is drawn back under the main structure and covered in glass. This gives it a more suspended appearance that is more in line with the original design.
A new main entry to the building is created on the square by extending the cylindrical staircase is down two storeys. The project will also open up passages between Arne Garborg Square, Nygaardsvolds Square and Einar Gerhardsens Square – linking them together in a web.

Security versus access
Today the government quarter is threatened by demolition as well as isolation, both due to security measures. Regarding the debate on security, it is a problem that many of the issues are exempt from public disclosure. We can discuss preservation, democracy, architectural quality, and infrastructure as much as we like – ‘security’ will always have the final word. AG plass 1940-2020 sets quality, openness and historic value as more important than security regarding the future of the Government Quarter – a utopian condition, of course.
This solution will restore an important urban space in Oslo – in an area that currently lacks public life and functions. It preserves the Y-block and enhances its architectural and urban qualities. In addition, it will interconnect Youngstorget, Akersgata, the Deichman Library and the Government Quarter in a new way. Finally, it will restore the main fire station, including the front square, to its former state. Thereby the public is invited back to the area.

Doubling the H-block, extending the ground floor
As a contrast to the horizontal volume of the Y-blokka, the new H-block is proposed as a slender, vertical counterpart. The extension to the H-block from the early 90s is taken away, and the original roofscape of Erling Viksjø is re-stored. On top of this, a new volume is placed and hence doubling the amount of squaremeters. The proposal also includes re-opening the ground floor that was part of the original design. Hence it creates together a fluid, open ground floor which extends into the Arne Garborgs plass.

Much like Oscar Niemeyers’ National Congress building in Brazil, the new Governmental Quarter expresses openness and a dependent relationship between the horizontal and vertical volume. It creates a new landmark – as well as a pedestrian friendly ground floor.

This is a further development of “Echo Chamber”, originally created for We are Living on a Star at Henie Onstad Art Centre.

Superunion Architects, with Martin Braathen and Even Smith Wergeland.

Superunion Architects is an office focusing on architectural production in a contemporary metropolitan and cultural context. The office was established in 2011 by architects Johanne Borthne and Vilhelm Christensen, and has had commissions in various scales including urban planning, public space, programming, studies, housing, interior and graphic design. Additionally, the office is engaged in exhibitions, competitions and teaching. (Text: Superunion)